There’s no time like the present to reduce consumption of plastics, and at minimum reuse and recycle. In the Pacific, we are facing questions on what to do with our own rubbish and imports that continue to float onto our shores. Recent reporting about the well-known “Great Pacific Garbage Patch” estimates that there are more than 78,000 tonnes of plastic in an area of about 1.6 square kilometers. The rubbish patch has grown substantially, helped by extreme events like the 2011 tsunami in Japan.

This year, for better or for worse, certain trends are creating a momentum of impact on the plastic landscape. At the national level, some governments are refusing to take notice. Leaving recycling up to the market and local level to regulate has meant inconsistencies in costs and infrastructure across districts and states and impeded an effective national movement in many countries.

In addition to what is floating in the ocean, plastic and other recycling is piling up on land in Australia, the United Kingdom, Samoa, the European Union, and elsewhere as China’s restriction on imports of waste takes effect. According to the ABC, the ban will impact about 619,000 tonnes of materials worth $523 million in Australia alone.

But, when one recycling bin closes, sometimes, another one opens. This presents an opportunity to transform the industry and societal behaviours, take leadership, and call out harmful practices.

We’ve heard positive news from industry recently, who noticed rubbish piling up in the Pacific. Rather than leaving the Pacific islands with empty shipping containers after unloading exports, China Navigation wants to pick up rubbish and recyclable materials for free. It is still figuring out where and how to process the recyclables. Pacific Recycles in Samoa is the only major recycling operation in the Pacific islands, and is aiming to improve quality of materials so that New Zealand or other countries will accept the rubbish.

Unsurprisingly, Pacific island leaders are acting. Governments of Vanuatu, Palau, Marshall Islands, and American Samoa have signed on to banning single-use plastic bags. Some have also adopted levies on bags or bottles. In New Zealand, a petition to ban plastic bags was accepted at Parliament in February. 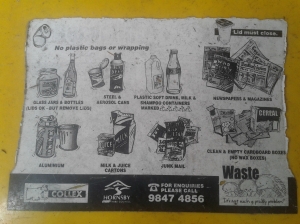 In Australia, waste industry and environmental advocates are calling on the government to take action on regulations to encourage a circular economy or ensure purchasing of recycled products in government procurement. The federal government has signaled it is an issue for state and local governments; so for now at the lowest levels, local governments like the Hornsby Shire Council in the Sydney suburbs have it on their agenda to find new solutions for recycling and to consume less plastics.

While China has framed the ban on imports of recycling as a way to improve its environment, it could lead to an increase in new production of the same plastics. China’s demand for some plastics, particularly polyethylene, are forecast to rise to make up for the loss of recycled plastic.  Producers, then, should take more responsibility for managing the environmental impact of the full lifecycle of their products. Consumers can also refuse to create demand for certain plastics, recycle, and utilise the local resources available to understand lifestyle habits.

It seems no beach or stream is free from pollution, but there are plenty of groups and individuals working to fix that. For example, the organisation Clean Up Australia has more than 7,000 registered clean up sites, empowering local communities with tools, networking, and knowledge. We know that commercial fishing gear make up a significant portion of ocean rubbish and have their own harmful impact on wildlife; recycling nets and other gear has turned into an effective business for more more than a few startups, converting them into carpets and other consumer products.  Bringing government, industry, and community groups together is essential to not only creating projects like those funded by the Australian Packaging Covenant but also to understanding global needs and expanding possibilities.