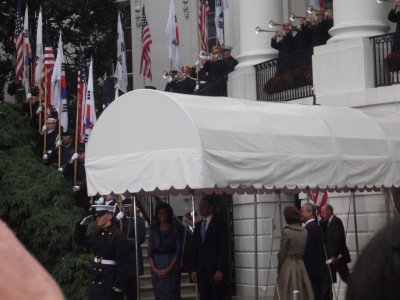 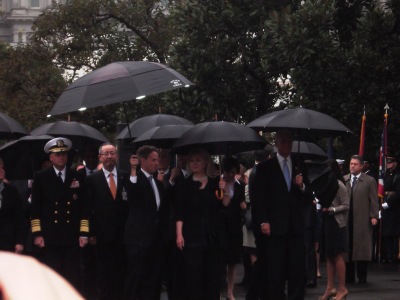 This morning’s Arrival Ceremony for the official state visit of Republic of Korea’s President Lee Myung-bak and his wife Mrs. Kim Yoon-ok coincided with a newly ratified free trade agreement between the US and South Korea. Guests were invited as part of an initiative called ‘White House Tweet Up’. I found out about the event just in time to secure entry and to be one of the many constantly snapping photos on the Lawn. 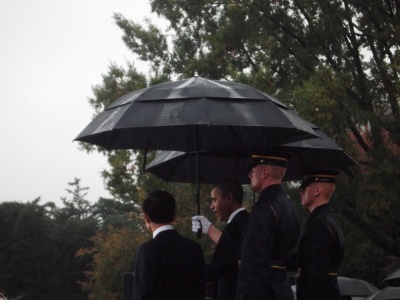 Undeterred by the pouring rain, hundreds of us waded through several security checkpoints and puddles to stand on the White House South Lawn to watch the occasion. The waiting began early; I arrived at 6:45 AM, stepped onto the lawn around 7:20 AM, and the Presidents arrived at 9:10 AM. After a heavy downpour, an announcement was made that “due to inclement weather, the Arrival Ceremony will be moved indoors.” Some guests left, while others simply wandered the grounds for photo opportunities. I stood firm and was rewarded for my steadfastness when at 8:40 AM it was announced that due to improved weather, the ceremony would indeed be held outdoors, as planned. Within minutes, men and women from the Air Force, Army, Navy and Marines bearing guns, musical instruments and flags began marching toward the White House to start the ceremony

Secretary of State Clinton, Treasury Secretary Geithner and Vice President Biden were some of the highest ranking officials in attendance. President Obama and the First Lady greeted and escorted President Lee and his wife as they exited their vehicle.

With servicemen holding umbrellas over their heads, Presidents Obama and Lee gave very brief welcoming statements to the crowd and to the world. They both praised each other’s peoples, national ideals, and the bilateral trade agreement. According to President Obama, ties between the two states are stronger than ever, and as a “Pacific nation” the US seeks to continue collaboration with South Korea. 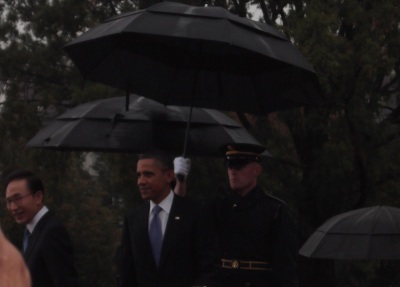 President Lee’s arrival is timely given yesterday’s ratification by both houses of Congress of the free trade agreements with Panama, Colombia and South Korea. For some industries (particular worries are in the manufacturing sector), the trade agreement will take away American jobs; however according to the Washington Post, “producers of dairy, pork and poultry products, chemicals and plastics are all likely to increase exports to Korea”. In addition to the Arrival Ceremony, there was a press conference in the Rose Garden, and President Lee will address a joint session of Congress. While the morning began with a soggy start, sunny, fall skies now overhead have perhaps foreshadowed a prosperous bilateral exchange in the forecast.